I spent most of last weekend at Filia's temporary Maine HQ (aka my parent's house), getting an huge assist from various family members on projects for Picnic. One project I was really excited to try was dip-dyeing fabric that I would then make into skirts. Dip-dying gives a lovely sort of ombre effect, going from light to dark. I was using white 100% cotton gauze and a mix of red and pink dye, so my ideal result was a dark, fuchsia red fading into a lighter pink, with a band of white preserved at the top. I had never tried this before and prepared by doing really the barest amount of research on the internet and basically winging the rest - which probably factored into the results. But more on that later.

It took us a while to figure out what our process was going to be. Because I wanted to use the fabric for skirts, it had to be oriented in a particular way. My mum also cleverly pointed out that all the fabric for one skirt should be dyed at once, since it would be hard to replicate the intensity of color or the exact fading pattern in two subsequent batches. The plan was to dip the fabric in the dye, leave it in there briefly, then raise the fabric up a few inches (so that the bottom of the fabric was still sitting in the dye) and let it soak for a few more minutes. We settled on a characteristically elaborate/MacGyverish set-up involving safety pins, dowels and bricks.

We started out by making the dye bath according to the instructions on the box (as any of my friends who have played board games with me can tell you, I always read the directions). I used half a box of scarlet dye and half a box of fuchsia. Then we took our pre-cut pieces of fabric (cut a bit bigger than I would need for a skirt) and pinned the top of them evenly to a dowel, two at a time. We also decided in advance how low we would dip the fabric and where we would pull it out to in the second phase of the dyeing, and put safety pins on both sides of the fabric pieces to mark those spots (you can just see them on the picture below).

So in this picture you can see that we initially dipped the fabric a bit lower, than pulled it out and let it sit at this level for a few minutes. We rested the dowels on joint compound buckets, adjusting their height as necessary by sticking bricks underneath them. This part of the dyeing process helpfully allowed you to have a glass of wine while waiting for the dye to soak in.

After the fabric was removed from the dye completely, per the instructions, we rinsed the fabric in warm and them cold water until the water ran clear. Then we hung the fabric on the line to dry. 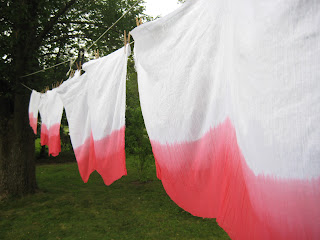 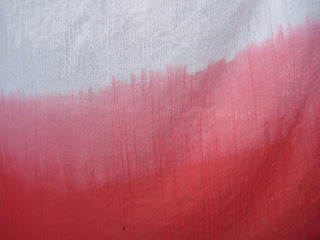 Not bad, right? It's not exactly ombre, but I thought it was a pretty good approximation of my original vision. If I was willing to put in a little more work and raise the fabric out of the dye more incrementally, I think I could have gotten a smoother fade and more color variation. But I'm kind of lazy, so I was OK with this. Once the fabric was dry, there was one final step: washing the fabric. I was fairly concerned that the dye would run - but if I was turning the fabric into clothing, it would have to be washed eventually. So we put the dyed fabric in the washing machine, in the delicate cycle with cold water. And trepidation.

So. That was a valid concern. Basically the colors faded quite a bit, but more importantly, all the white was dyed light pink (it's a little hard to tell in the picture, but trust me on this one). It's not awful, and in fact is still quite usable, but it's not really what I was going for.

So what went wrong? I thought I had rinsed the dye out really well. My sister, who is a recreational tie-dyer, says that she usually waits overnight before rinsing the dye of of the fabric the first time. The directions also recommend using a fixative (although, side note, the directions on the box of dye are written in like 4 pt font in light gray on a white background, so it could have said a lot of things. Seriously, maybe the Rit Dye people can get on that.) - but I went to a couple different stores and couldn't find any. Maybe the pure white fabric is no match for even the tiniest residual bit of dye and my original vision was a pipe dream.

In any case, it was pretty fun nonetheless and I'll probably try it again, either waiting overnight to rinse the dye or trying to find some of that mythical fixative. If anyone wants to try it, I will say it was much easier as a two-person operation, especially if one person keeps their hands really clean and dye-free to handle the fabric. The results of this method came out so-so for use in apparel, but I suppose it would be great for something like curtains which you could dry clean, since the fabric looked great before it went into the wash. If anyone has any dyeing tips, I would love to hear them!!

Extra thanks to my mum for help with the dyeing, and to my parents generally for not minding that their house looked like a fabric store exploded in it for the weekend. 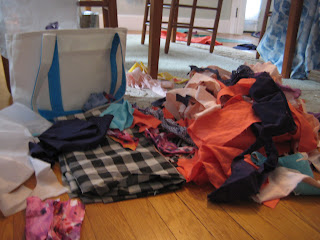 Email ThisBlogThis!Share to TwitterShare to FacebookShare to Pinterest
Labels: Before and After, DIY, fabric, filia

Kate
I’m Kate and I make stuff. I love to be busy and I always have a project. I also love a bargain, trying to make something old into something new and fun, and a good before-and-after.